A little late but not too late I hope.

I was out and about on Saturday in a city I've not been to before. And it was wet! Really wet. It rained so heavily that I can't say that Stuttgart showed itself in its best colours! But we'd already been around a rather lovely palace with a water feature or two, and dived in and out of the rain to take in a few sights in town before heading to the arena to see Elton John on his "Farewell Yellow Brick Road" final world tour. By the time we drove back, I was relieved that it was dry again. When I got home, the first task I needed to do was water the plants on the balcony as one or two of them were looking rather droopy and sorry for themselves! And even though it's dry and sunny at the moment, there's a lot of talk of weather round here. People are aching for summer but it's been way too dry over the last 12 months or so and there's concern that there's not nearly enough ground water for the time of year, and farmers are worried.

That's a whole lot of the wet stuff and so this week, I'd like you to be inspired by water! 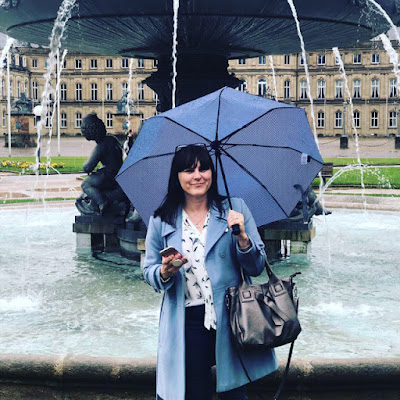 I think you could take this prompt in almost any direction you like but here's a few ideas if you are truly stuck:

Here are a few pages I've made related to water

I think that these ideas could be some good jumping off points this week and I'm interested to see where you go!

Wherever that is, I really hope you'll share. It would be great to see what you make.  You can connect with us in our Facebook group here. Tag your entry with #WMXX so we know exactly which inspiration you've taken.


Have a great day everyone!
Posted by Lisa at 21:23 No comments:

This is another layout that I was inspired to make due to a Simple Scrapper Story Starter™ prompt on the topic of "Language" and one that I've been meaning to make for some time - for many years in fact.

Yes, I was really (and I mean really) sad to hear that Kaiser Karl had died but I was also grateful that I'd had the chance to understand him here in Germany in his own language. He had a very specific way of talking - in French, English or German - but hearing him and understanding him in his mother tongue was a bonus of learning the language that I'd not foreseen. And it made me very happy.

I'd been a fan of Karl since the 80s and learning more about him during my time here has been something that I have really relished. Living in another culture and learning this language that is so difficult has been a challenge over the years but I wanted to record this realisation that had occurred to me several years ago but had not recorded up to now.

I used my Counterfeit Kit Challenge January 2019 kit "Sigh", (lo #6) due to the soft colours that I thought would work really well for everything that reminds me of Chanel. I picked out whites, blacks, greys, soft pinks and blues making sure I had a splash of red too. I used a sketch from the Simple Scrapper premium membership and was happy to try this layered waterfall effect. It was a lot of fun and I love how it turned out. Simple and what I hope is elegant. 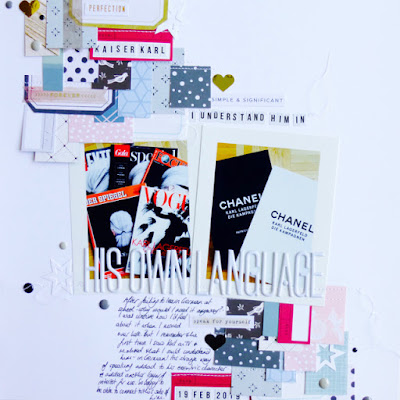 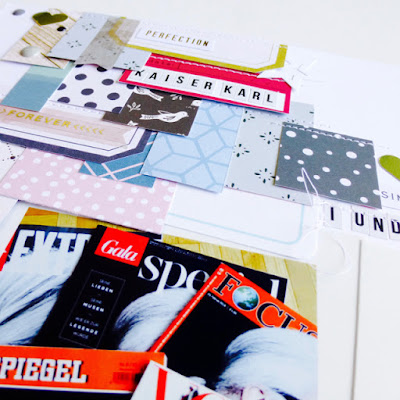 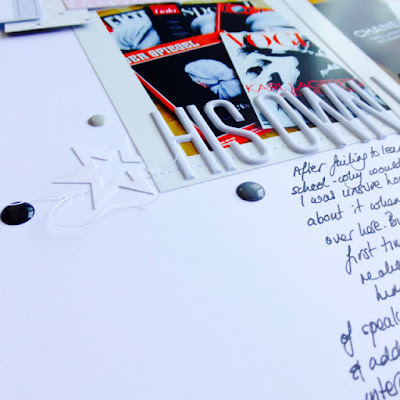 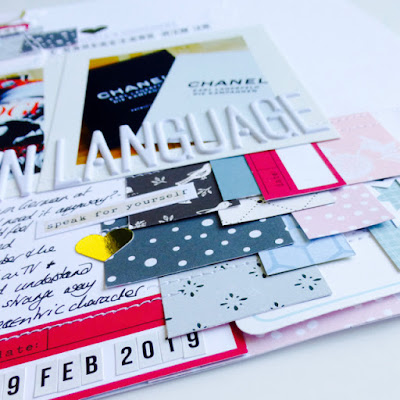 A story I've been meaning to tell for such a long time, down on paper at last. That gives me such a sense of achievement.

What's a story you've been wanting to record? Why not check out my list of previous prompts to find one that works for you and get it told. You'll feel so good when it's done. This is something I'm learning from the very inspirational Susan who is focusing on untold stories this year and I love it so much. Looking through my albums, I know that is what I want to do more of. Watch this space.

As always, I love it when you share too and if you've been inspired to create, don't forget that you can add your own creations to our Facebook group here. Please don't be shy! Tag your entry with #WMXX so we know exactly which inspiration you've taken.

Yes! I made a layout. I know I should do more but somehow the days slip through my fingers and weeks go by before I'm forced into making a layout due to another scrappy assignment. This is exactly such a layout.

The Counterfeit Kit Challenge prompt #2 called for us to use something hidden and I went with some hidden symbolism on this page which features the necklace in question.

I even used the photo I had actually featured in the WM#325 prompt. 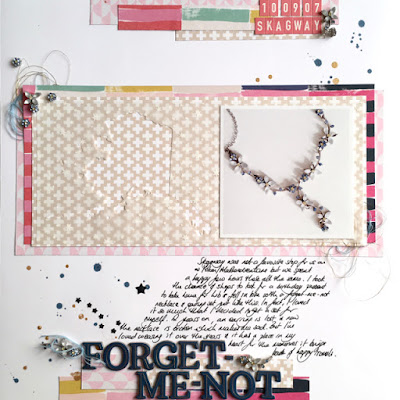 The symbols include using yellow (gold) and blue, which are the colours in Alaska's flag, with ink, thread and the alphabet; the name of the layout itself which is the flower featured in the necklace and is also the state flower for Alaska; a hidden-in-plain-sight vellum cut out (can you tell what it is!?); and also the design from the Alaska flag (can you find it?) 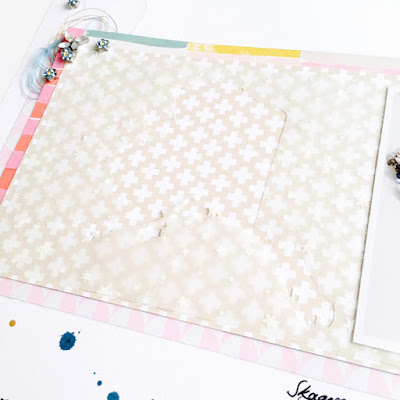 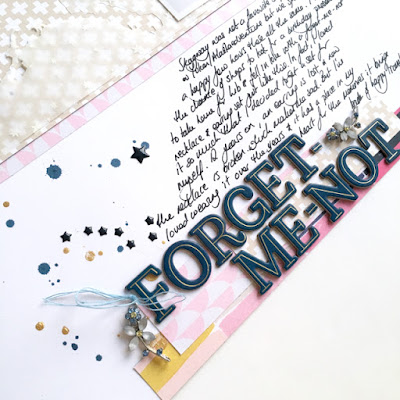 I also had a lot of fun cutting up the necklace - which was already broken beyond repair :-( - and finding ways to include the beads and flowers on the layout itself. The flower at the bottom, next to the title is actually loose and moves around because I attached it just though the loop, and I love that little detail. 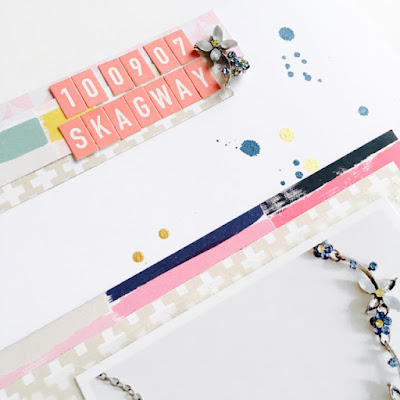 I'm so happy I was encouraged to make this layout by the prompt both here and the Counterfeit Kit Challenge. I was pretty sad that my necklace had broken but now I have a record of it for ever!

As always, I love it when you share too and if you've been inspired to create, don't forget that you can add your own creations to our Facebook group here. Please don't be shy! Tag your entry with #WMXX so we know exactly which inspiration you've taken.

I got caught up with other stuff - which does include some creating which I can share with you in the next day or so - and I neglected this corner of the web.

But, here I am again and I guess I should just keep going!

As I write this, the news has just come out that Prince Harry and Meghan have had a boy! So I looked through previous prompts to see what we've done to date that match this event.

You know that I want to find a new angle for this because I like to take topical events with a spin. We've had little girls and therefore, why don't we go with:

Be inspired by little boys.

I think that even though you can just go with scrapping about a baby boy in your life, I really think you could also consider some other approaches:


I think that's quite a nice list of possible alternatives from the straightforward little boys in your life so I really hope that you can find a way to be inspired this week.

And because I like to have an image in every post and if possible, a layout or two, here are a few layouts I've made recently for some little boys in my life. 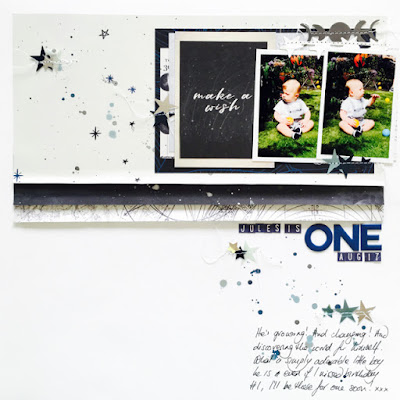 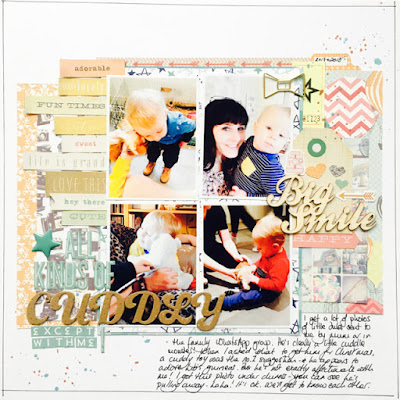 My oldest nephew (actually, I've only got two - ha ha!) 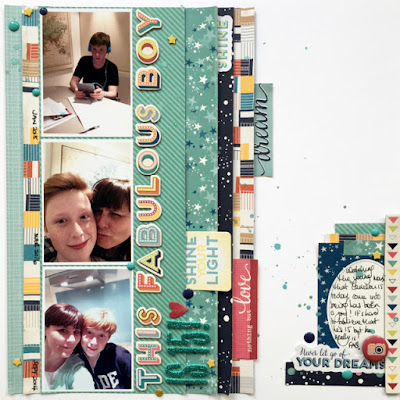 And my baby, baby brother who will always be a bit of a little boy to me! 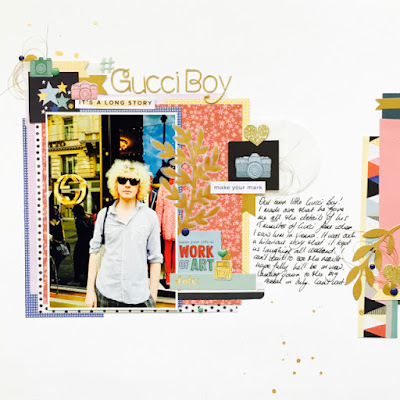 I think that these ideas could be some good jumping off points this week and I'm interested to see where you go!

Wherever that is, I really hope you'll share. It would be great to see what you make.  You can connect with us in our Facebook group here. Tag your entry with #WMXX so we know exactly which inspiration you've taken.


Have a great day everyone!
Posted by Lisa at 18:53 No comments:

If you leave a comment on this blog, you do so with the knowledge that your name and blog link are visible to all who visit this blog, that you have published your own personal details and that you have consented for your personal information to be displayed.

This personal blog is currently generated from Europe and the USA.

Where We Go For Inspiration